You may recall that A few days ago I posted the Sparkly flying dragonfly toys craft that my twins and I made.
Well, we made birds and butterflies too!! 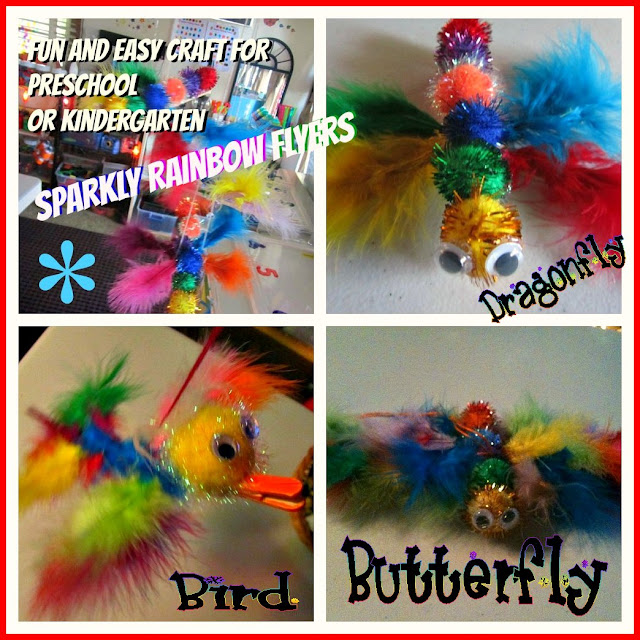 These are great for Preschool through First grade. They would also make a fantastic home made gift for your child to give to his/her preschool or kindergarten classmates as a Holiday gift!
The kids LOVE these!! They are so fun to play with. They look just gorgeous under a light or in the sunlight when you gently swing them on their string to make them "fly". They sparkle so pretty!!
My friend's 3 year old daughter with Autism still loves it and takes it everywhere she goes! She even takes it to preschool. She wears it around her neck like a necklace as well as plays with it to make it "fly". Last week she took it to preschool too! Her preschool teacher at the special needs preschool she attends loved it and plans to make them with the preschool! So awesome!
We used sparkly craft pom poms, popsicle/craft sticks, hot glue gun, feathers, googly eyes, and string.  If you form the popscicle sticks different ways you can make all sorts of cute, rainbow, sparkly, flying creatures!  I used this activity as good practice with using the hot glue gun, but you can use regular elmers school glue too!  Just leave them sit to dry for 24 hours!
Read the captions under each photo to find out how to make them!!
Butterfly 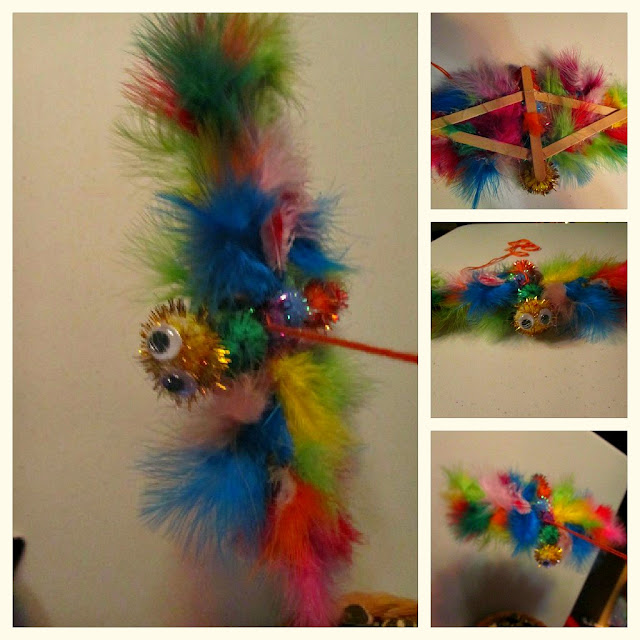 Here is what the underneath of the butterfly looks like. I layered the feathers on top to cover the craft sticks. I did the body of these the same as the dragonfly. The small feather in the middle on the bottom is hot glued on  to cover the bottom end of the string tied on to make them "fly" I put hot glue right over the string and then put the small feather there to help hold it in place. This helps so that the string won't come loose during play. Trust me, don't skip this step. You will thank yourself later! You will have to pay around with the string to get it even. You want the butterfly to be pretty level when you hold it up by the string, not front or back heavy. Just adjust it if it does not seem very even. 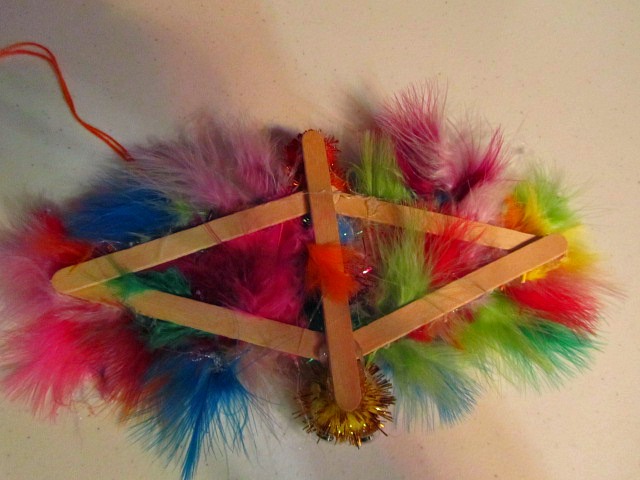 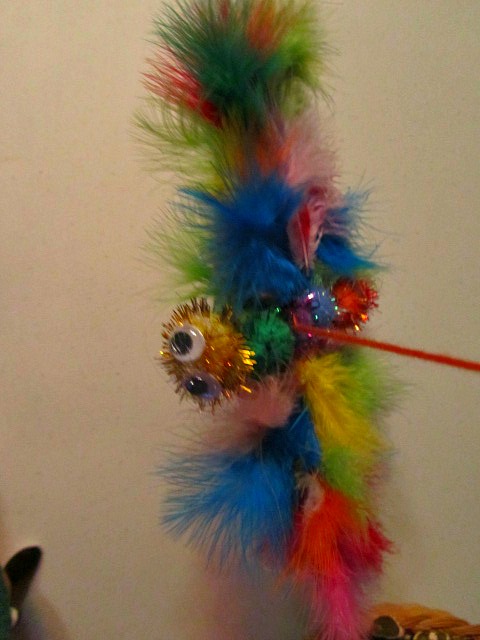 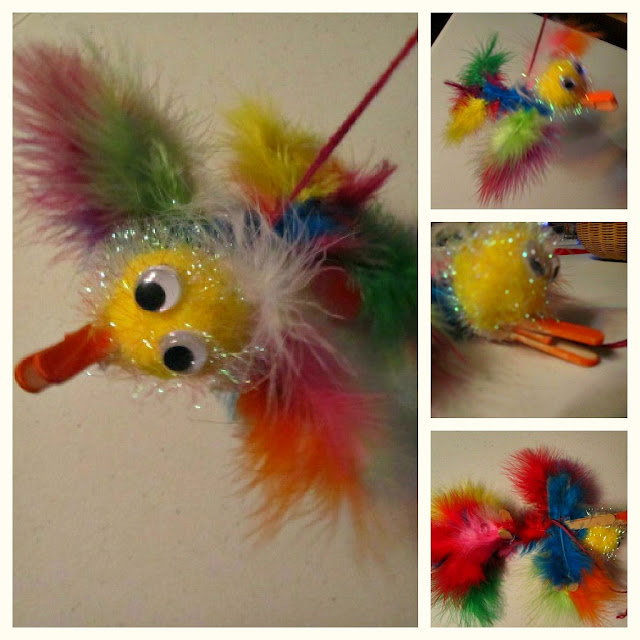 This is the bird "in flight" you can see a bit of blur in the pic from it twirling! Love this goofy bird! haha. I layered the beak with craft sticks that i snapped in half and in half again for the mid section. See the pics below to see the bottom and side views. You might notice two legs on the bird. Those are there for a very important reason, to keep the bird balanced. They are glued on to the sides, near the tail. The bird is a little more advanced than the dragonfly and butterfly. You have to take one craft stick and glue three craft sticks in a large V formation to one end to make the tail. By large V formation, I mean one glued to the end going straight, one glued to the end going to the right, and one glued to the end going to the left. I showed the basic formation below but minus the middle of the back end. DO NOT leave out the middle. I had originally started with the form below and had to go back and add the third back piece down the center once I realized it was really front heavy!  You do the wings by gluing two craft sticks across the birds back. The beak is done by gluing half of a stick with a smaller piece glued to it to the top and another half to the bottom of the other end of the bird, the front end. See the side view close up of the head. Then you glue on the head. Once you have the form done, you can start adding feathers all over. I added to the bottom as well as the top going in different directions to create layering of many colors and for complete coverage
When the bird was done, I added a little white feather at the top, spread out a bit to create an adorable tuft of hair!! He would not be as cute without it!!  haha!. 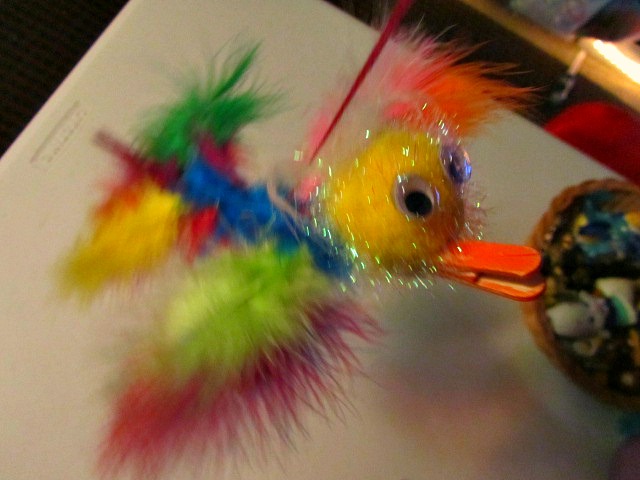 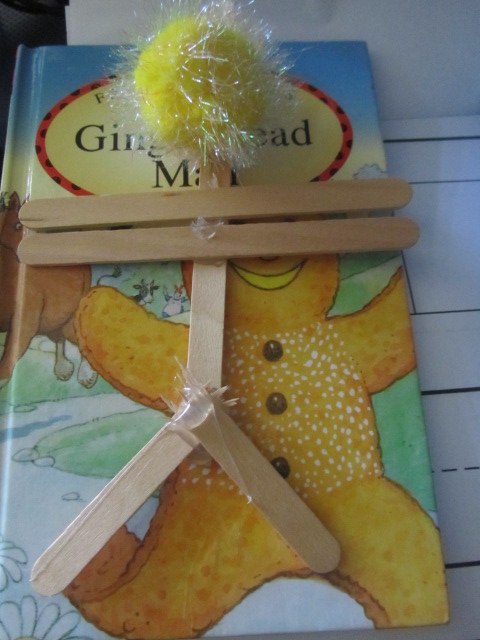 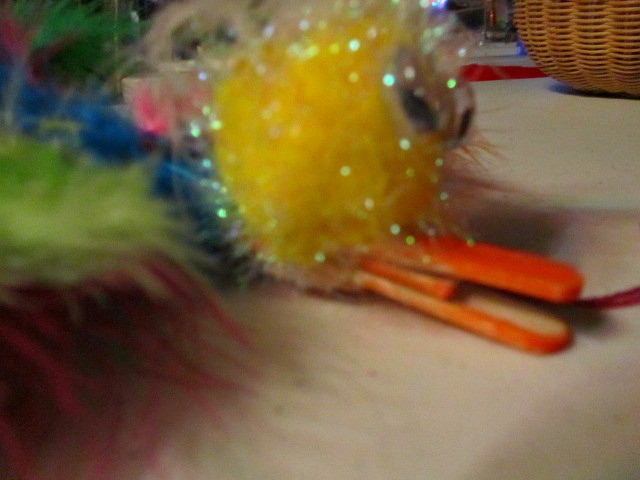 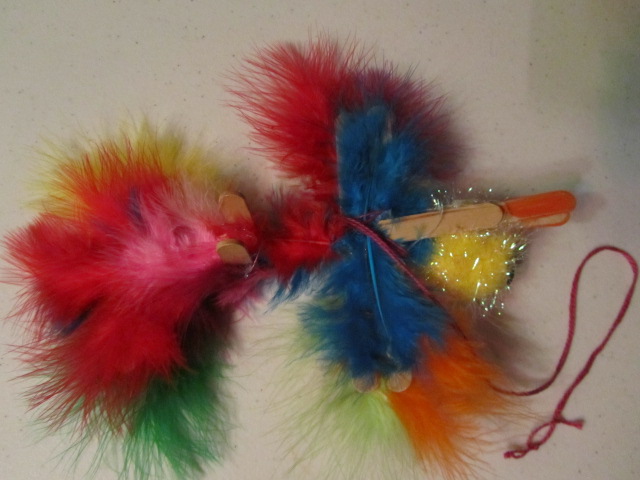 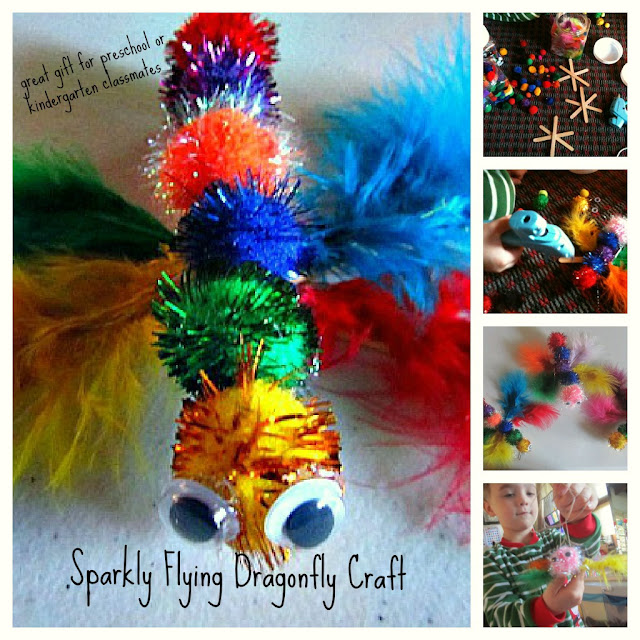 You can see how to make the dragonfly HERE on the original post from a few days ago!! 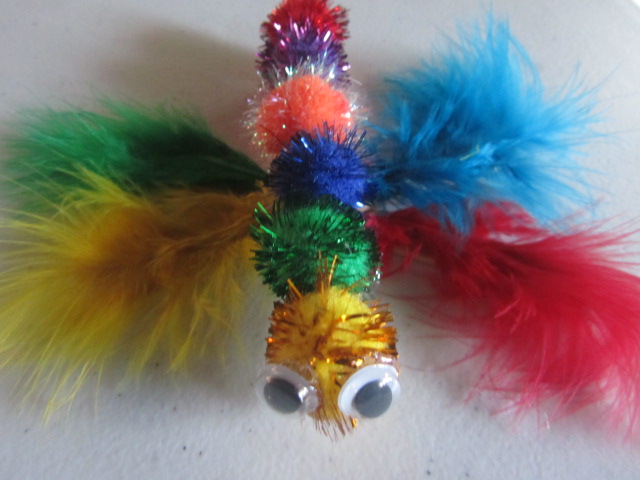 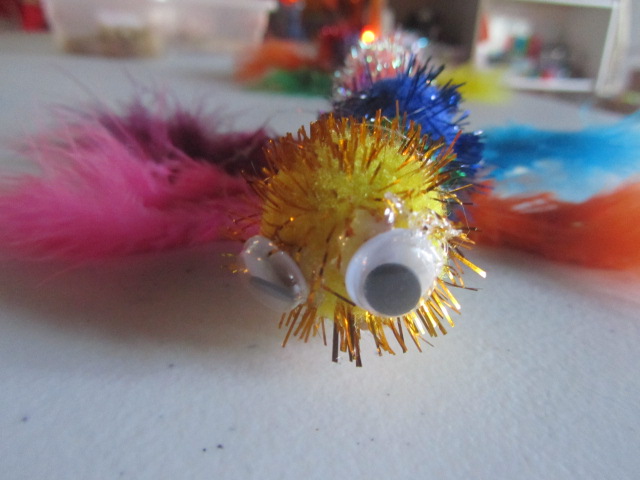 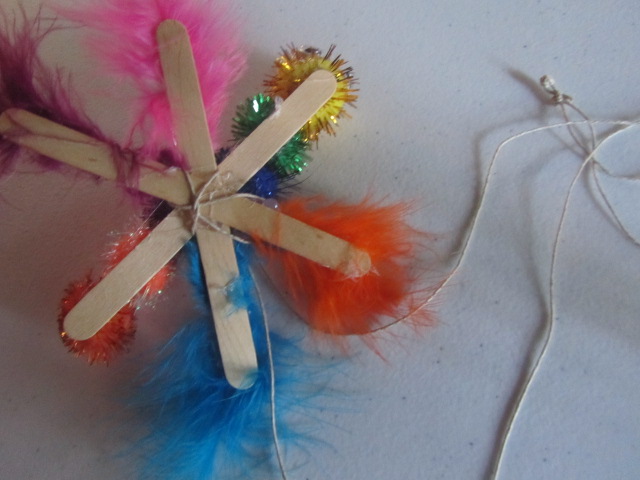 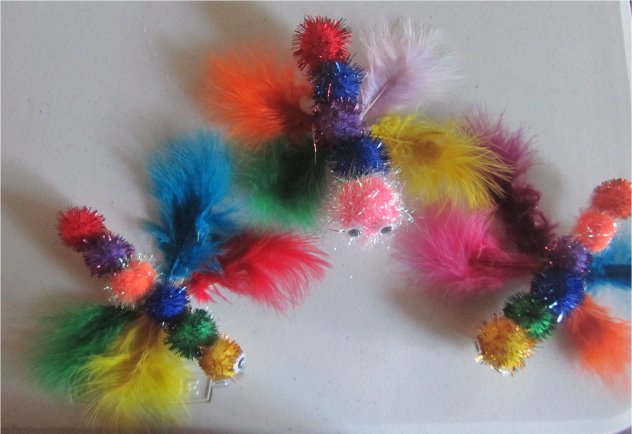