Sure we celebrated the Holidays just fine, but usually only made Halloween, Thanksgiving, and Christmas special. The other Holidays were always just...
I guess.... 2nd rate.

So I tried to start gathering ideas for ways to make all of the Holidays in Jan-Sept. more fun and special.  Starting with Valentines Day.

Valentines Day is a tough one, the school age kids have a party at school. So that already makes it fun for them. They get candy and valentines, cute little erasers and pencils from their class mates. All good stuff of course. However I felt like I was not making it special enough at home. I wanted something to really WOW them and make them feel like it was a fun day. Something that would become a regular yearly tradition.

I had seen various ideas but was most enthralled by these Valentines Day chairbackers from Pottery Barn Kids, however every single time I tried to buy them.....they were SOLD OUT!!  AGGHH!!  So in place of these cool chairbackers I bought various cutesy things from Oriental Trading...like these mailboxes that you add gems and stickers too. 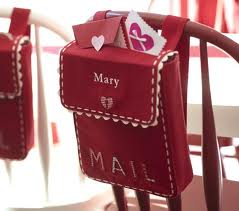 example
OK so the way I found out about them was from Jon and Kate Plus 8, don't laugh.
She and I happen to share a lot of the same taste in items for kids....
OK well you can laugh but....I don't care. I may not agree with all of Kate's ways but, I think she was not in the wrong on most of the ways she treated Jon. He was a big immature baby who was NOT pulling his weight when it came to caring for the kids. She got testy with him and voiced her feelings a few times by getting huffy. She should have tried harder to keep THAT off camera but hindsight is 20/20..right? You have to admit as harsh as she was, he was a big slacker and did not pull his weight. It really sucks when you have a bunch of little kids and you are out in public....trying to keep them in line....trying to keep track of them.....trying to make sure they have a good time.....trying not to get overwhelmed......and you end up doing 99% of the work trying to do all of that. You tend to get frustrated and could get huffy if things do not turn around. Well that is exactly what she did...she had to keep nagging him to pull his weight and he did not so she blew up. Anyone would. There is only so much crap a person can take before they loose their cool and become an a$$.

Well to be honest, the mailboxes from Oriental trading sucked. They were flimsy and barely could hold any goodies at all. FAIL.

So in 2008, 2009, and 2010 we tried various items from Oriental Trading and Target...
nothing ever really standing out as something special to make Valentines Day special.

I just wanted something simple and cool to put all of the Valentines Day goodies in!!!  Is that so much to ask???

I realize it is a cheesy consumer driven Hallmark Holiday but let's face it. Kids like that crap. They want to participate and they want to get goodies.

So last week I realized. OH CRAP, the 2011 Holidays (cheesy or not) are vastly approaching! So I started looking for ideas online. I had given up on the idea of the chairbackers but thought OH what the heck and went to the Pottery Barn Kids website.
THOSE LITTLE STINKERS WERE THERE AND NOT SOLD OUT YET!!
ABOUT DARN TIME!!!!!!!!!!

I HATED the price but thought OH WHATEVER and bought them!!!
They have really good reviews that claim they are very well made, very sturdy, etc.
So I expect they will last for many years. I plan to keep them in a rubbermaid storage container after every Valentines Day. That should ensure that they last for many years!

Geez Louise those stinkers are popular or something!!!

I only bought them for my Twins and then 2 days later as much as the price killed me, I bought the other 3 for my older 3 kids. It's is a good thing that I did because as of today they are GONE fron the website!!!

So without further ado........ The Valentines Day Chairbackers in all their glory. 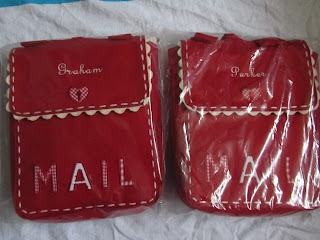 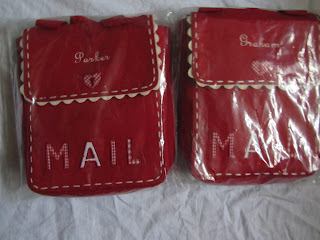 The ones for my 3 older kids are still on their way in the mail.
Now I just need to buy some goodies to fill them all!