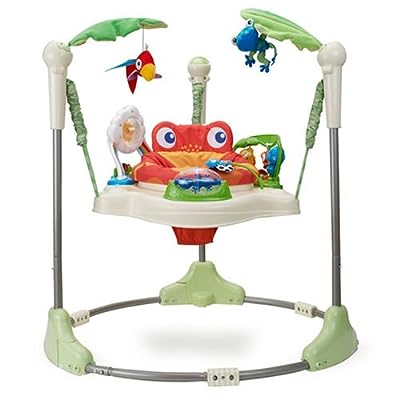 I purchased the Rainforest Jumperoo for my twins. and it is a pretty nice product. My twins enjoy it when they play in it but there are a few faults to this product.First off there is absolutely no padding in the seat. The baby will have their tummy against hard, lumpy, edgy plastic. We solved this issue by padding around the entire seat with some nice receiving blankets to avoid any pain or injury that could be caused by leaning and bouncing in the seat while playing in the Jumperoo.The toys on the Jumperoo are rather cute and entertaining but there seems to be too much empty space that could have been used for another toy or two on the Jumperoo. I doubt anyone would want to use the part that appears to be a little snack tray. I don't think it would be wise to let you baby snack while jumping or bouncing wildly as they do in the Jumperoo.The peek-a-boo tiger is a bit lacking in the sense of it could be a little more dramatic and entertaining. A growly but cute lion sound would help. It also needs to pop up higher and sit lower while not being popped up. Nice concept but not quite there.The insect chew toy hangs down off the side of the Jumperoo too far and is often challenging for a baby to grab on and pull it up to play with it. I think maybe something that sticks up but can be pulled in to gnaw on would be a better idea.This Jumperoo is a cute and fun toy however it could be improved.However it does provide enjoyable bouncing fun for baby!
at October 11, 2010