every day with Leslie Hall, seriously every day...

So.....  I hope my readers enjoy sarcasm and hilarity. 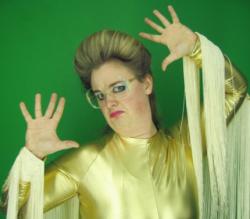 Several months ago I was reading my facebook feed and came across some wacky video posted by my friend Steff. (*shakes fist at Steff*)  The video was LesIie Hall doing Tight Pants, Body Rolls.  Of course at first site  I was pretty dumbfounded at the elite awesomeness....   haha  Ok well maybe more like mildly disturbed and slightly amused.  That day was like no other day as it turns out though.  On that day, at the moment that I watched THAT video.....something happened.  One of my Twins, Graham who was 2 years old at the time was captivated by this video.  This would be the beginning of an everlasting daily dose of Leslie Hall. You see, Graham quickly became Leslie Hall's biggest fan.  He loves her, he loves her music, he loves her videos, he knows her name. He requests to hear her daily.  He swipes my iphone, turns on youtube, and FINDS her videos..... and watches them over and over and over.  Every day.  He does much more than watch Leslie Hall videos every day though just to clarify that.  The usual....  playing, learning, playdates, gymboree, educational tv,  dancing, playing, snacking, eating, playing, learning, etc etc etc etc.  all of the good stuff.  ;)

His Twin, Parker is a fan of Leslie Hall too, how could he not be when he hears his brother jamming out to her catchy tunes on a daily basis. However, Parker isn't as into Leslie Hall.

According to Wikipedia,  Leslie Merritt Hall (born November 15, 1981 in Ames, Iowa) is an American satirical rap artist and front-woman for the band Leslie and the LY's and the operator of a gem sweater museum.


One her website, she sells tight stretchy gold spandex pants and gem sweaters,  Ya know, because they are so freaking awesome.  In one of her videos she and her gem sweater knitting cohorts knit the largest gem sweater on the planet.  What a feat.  I bet they were quite proud of their accomplishments.


Leslie Hall and her crew are 5 kinds of awesome.  I bet everyone would agree.


This video was Graham's first introduction to Leslie and her awesomeness.

This is his second Leslie Hall favorite.

This is his latest favorite by Leslie.